Is your hard drive not being recognised?

Sometimes our storage devices like hard drives or memory cards are not recognised by the operating system, making it impossible to access our professional or personal data. Here is some essential advice about what to do when a drive is not recognised.

For traditional electromagnetic hard drives, many types of failures can occur. First and foremost, the defective areas of the hard drive, linked to usage or physical damage, can cause errors and missing files/folders.

When the damaged areas are found in the hard drive's file system, you will be prompted to format the partition, which you should not do in order to increase the chances of retrieving data.

If the hard drive is not at all recognised by the system, nor the BIOS, be sure to check that the drive is also not making any noises. Clicking, whirring, or scratching sounds are a sure sign of physical failure, which may be causing the drive not to be recognised by your system. In these cases, a professional data recovery engineer is required to recover the data.

My hard drive can't be accessed but is recognised by BIOS

If your hard drive is spinning without a problem but is not recognised by your computer's BIOs this an be a sign of logical failure. This type of failure can be the result of defective media or data corruption from another source. In this case, first check the jumpers, which will vary according to the configuration of the hard drive. You should also check that the connectors and power supply are properly connected. In severe cases, there may be a problem with the circuit board. In the majority of logical failures, you should be able to recover the data via a data recovery software.

My hard drive is not recognised and appears dead

A burnt circuit board (PCB) is one of the most common problems seen in hard drives. A power surge, overheating or an inadequate power supply can result in a hard drive frying its spindle driver chip leaving the data inaccessible.

In some older models, you may be able to swap the PCB from another model. But most modern hard drives have logic boards that have been adapted to the head disk it was manufactured with. In those cases, a data recovery specialist will need to rebuild the parameters or transfer them from the fried board to the donor PCB to make it fully compatible with the damaged hard drive.

My hard drive is not being detected by Windows

One of the most common questions we hear is, 'Microsoft Windows on my PC is not recognising my hard drive. What should I do?'

Firstly, you should restart your computer, check the connections and plug your external hard drive into another PC. If the problem persists, there could be two reasons:

The hard drive does not appear in Windows Explorer 10, 7 or 8 but is detected by the computer – there could be a letter assignment problem in Disk Management – the hard drive doesn't have a letter by its name, so Windows File Explorer won't be able to detect the disk partition. To assign a drive letter to it, follow these steps:

- Right-click on the workstation icon on your desktop

- In this window, click on 'Add' to assign a drive letter to hard drive partition or click 'change' to change the drive letter.

My hard drive is not being detected on my Mac

If the external hard drive is not recognised when you plug it back into the Mac, first ensure your USB cable enables the USB port's auto-power function. If the hard drive is still not recognised, verify that the 'Finder' settings allow you to view newly connected devices. If your hard drive is NTFS formatted, non-native to the Mac, the Read Utility may need to be reset (Paragon NTFS us available in most versions of the Mac OS). If the external hard drive continues not to be readable and is not visible on the BIOS of other systems (Windows or Linux), then a hardware failure should be considered.

When a hard drive is unrecognised due to logical damage, it is possible to recover the data through the use of data recovery software, If the hard drive is hosting the affected operating system, you should take care to disconnect it and plug it into another PC before you proceed with the recovery.

If it is a memory card, smartphone or tablet, you should buy an adapted and plug it into a PC. Free tools like TestDisk are very efficient and have many tools to help recover your files, but they require IT expertise to ensure you don't cause additional damage.

If you want to benefit from specialist expertise, Ontrack EasyRecovery software will allow you to recover your data in most cases. In severe data loss cases – a violent shock, immersion to high heat or a disk not being detected by the best data recovery software – it is advised that you contact a data recovery company directly to recover your data.

If you are in any doubt, it is always best to get advice from specialists, as this could stop you from permanently losing your data.

My SSD/USB drive/memory card is unrecognised. What should I do?

Unlike mechanical hard drives, SSDs, USB drives and memory cards use flash memory. If your media device is unrecognised, it may be because of the condition of the connectors. You should start by cleaning the connectors with a cotton swab moistened with alcohol to see if this solves the problem. If your device is still not recognised, it could be due to wear. Flash memory units have a limited number of write/delete cycles for each storage unit cluster, ranging from 1000 to 100,000 depending on the quality of the product. Once the limit is reached, access to the device can be limited, and if a backup has not already been put in place, one should be. If the drives become inaccessible, recovery will be required.

Below are some of the most frequent questions we are asked regarding unrecognised hard drives.

Why is my external hard drive not recognised by my MAC?

It could be as simple as the USB cable being worn out or that the utility of the Mac is misconfigured and is not displaying any connected devices. If the hard drive is not partitioned in HFS+ format, the Mac OS X format, or ExFat format, verify that your utility is correctly installed.

If you have checked all of the above, there could be a hardware problem. In this case, you will need to contact a data recovery specialist.

It may seem simple but change the USB port and check that your USB cable is functioning properly. If the hard drive is appearing in the utility but is not accessible, you will need to repair it using the terminal commands. If the hard drive continues not to be recognised, you may have to use a data recovery software to locate the files.

Is updating drivers a solution?

When your hard drive is detected by your computer but is not displayed in Windows Explorer, you can try to update the driver. To do this, you should follow these instructions:

2. Right-click on the start button then click on "device manager". In this list, a coloured indicator may appear to indicate any errors.

3. In the "Disk drive" section, you will find the reference of your disk. Right-click on it then click on "Update Driver". The update will automatically be taken over by Windows Update.

Should I format my hard drive?

You should only format your drive if you have no data (or data you do not need) residing on it. You will need to choose the right format that suits your computer. Opt for NTFS or FAT32 if you are on Windows, and HFS +, ExFat or Mac OS Extended if on Mac.

Remember that formatting a hard drive will erase all the stored data, so only choose this method if your hard drive is empty.

SSD drives, USB sticks, and memory cards: what you need to know

Unlike mechanical hard drives, SSDs, USB sticks and memory cards are based on flash memory and have no moving parts.

A flash device may not be recognised by the system due to dirty or defective connectors. Carefully cleaning them with the help of a cotton wool bud, lightly dipped in alcohol, then letting it dry thoroughly, may solve the problem.

Alternatively, it is possible that access becomes difficult, or even impossible. This is often linked to a failure in the storage unit clusters. If the SSD, USB or memory card is new, this could be a defect covered by warranty. In other cases, it could be due to excessive usage or wear and tear.

It is important to know that flash memory units have several writing/suppression cycles limited for each cluster, going from 1,000 to over 100,000 depending on the quality of the product. When this limit is reached, access is more difficult and it becomes a pressing matter to consider saving the data elsewhere. If the drive becomes totally inaccessible, professional data recovery is necessary. 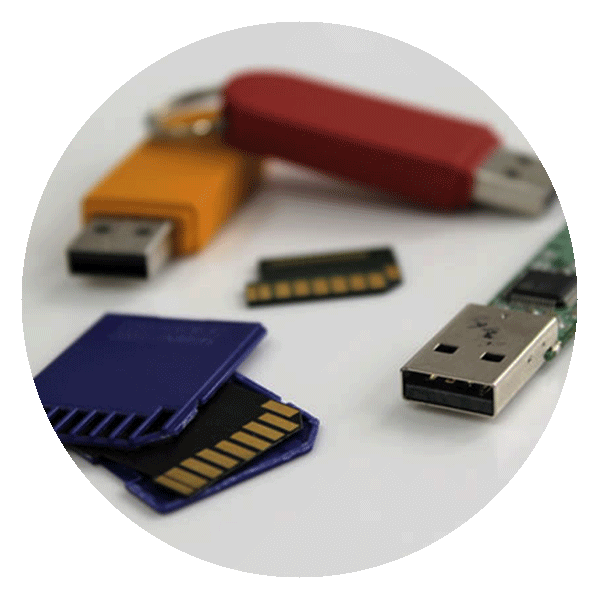 Today’s external hard drives assume the function of a USB drive, but with a larger dimension and more significant storage capacity. The transportation of large quantities of data is therefore made easier, but the consequence of this advantage is a reduced resistance to various hazards.

External hard drives are more susceptible to data loss, including component failure following physical damage, exposure to high heat, or from not safely disconnecting it from a computer.

While it is often known for its superior reliability, MacOS sometimes cannot recognise an external hard drive. First of all, it is essential to check if the cable is functioning correctly. Also, there could potentially be an issue with the USB port, so it is best to try another port first. If the drive is detected, but not accessible, attempt to repair the file allocation table using the system’s disk utility.

It is enough to click on 'repair disk' to try to retrieve the data. If the operation fails, a dialogue box will pop up to notify you. If the file systems are not recognised, which sometimes occurs with the older versions of MacOS, do not format the drive, as you risk losing your data.

What to do when your hard drive isn't recognised

There are many different software solutions on the market for DIY data recovery. For an easy to use, trusted solution, we'd recommended downloading the free trial of our Ontrack EasyRecovery software to try and retrieve your lost files.

In the most serious cases, such as physical damage, water or fire damage, or when a drive cannot be recognised at all, professional data recovery in a cleanroom will be necessary to save the data.

In all cases, in cases of doubt, it is worth seeking professional advice to avoid risking losing your data permanently.

We’ll collect your device and perform an evaluation, free of charge

Data recovery for single drives start from £399 + VAT, and for smartphone from £400 + VAT. The final price will be determined at the end of the evaluation, according to the complexity of the work involved and the urgency required.

To begin, start by clicking on the type of media from which you need data recovered. The evaluation time for single hard drives (HDD and SSD) is four hours*, and within 24 hours for RAID systems*. Other media, such as mobile phones do not require an evaluation to provide an accurate quotation.

*These are typical time frames and apply within normal business hours (Monday to Friday, 9am to 5pm). For an out of hours, emergency service, or if you need further assistance, please contact us on +44 (0)1372 741 999.