How Ontrack recovered data from the Columbia space shuttle disaster

It’s February 1st 2003, and after 17 days in space the Columbia space shuttle is scheduled to land at the Kennedy Space Centre at 9:16am, marking the end of the STS-107 mission. At approximately 9:00am disaster occurs, and footage of the shuttle disintegrating above the state of Texas is broadcasting live on CNN. All seven of the crew members aboard the shuttle died in this tragic accident. The origin of the disaster was later found to be a piece of thermal insulation foam that came off the shuttle, 80 seconds after take-off from Earth.

6 months after the crash, a charred and battered hard drive from the shuttle was found amongst other debris in a dried up lake bed. NASA entrusted this hard drive to Ontrack to recover as much data as possible.

Jon Edwards, an experienced clean room engineer at Ontrack and his team were entrusted with this mission. He recalls:

"I have witnessed many disasters in my career, some of which have led me to retrieve data from equipment that has suffered in the most extreme conditions (floods, fires, collisions, etc.). One day my supervisors contacted me and explained to me that my team and I had to attempt to recover data from a hard disk that had partially melted after passing through the atmosphere, dropped about 60km at a phenomenal speed, and after having landed was left out on the ground 6 months before being found. It was a very complex task and I must admit that when I first received the disk, I wasn’t convinced that I could get anything out of it."

Indeed, the media was partially shredded and burnt beyond recognition. It was also damaged from being exposed to the elements, in which it had remained for several months. This meant the dust seal on the drive had seriously deteriorated from the intense heat upon re-entering the atmosphere, exposing the internals of the drive to all types of foreign particles likely to cause damage and ultimately make a recovery impossible. Here’s a glimpse of just how much damage had been caused: 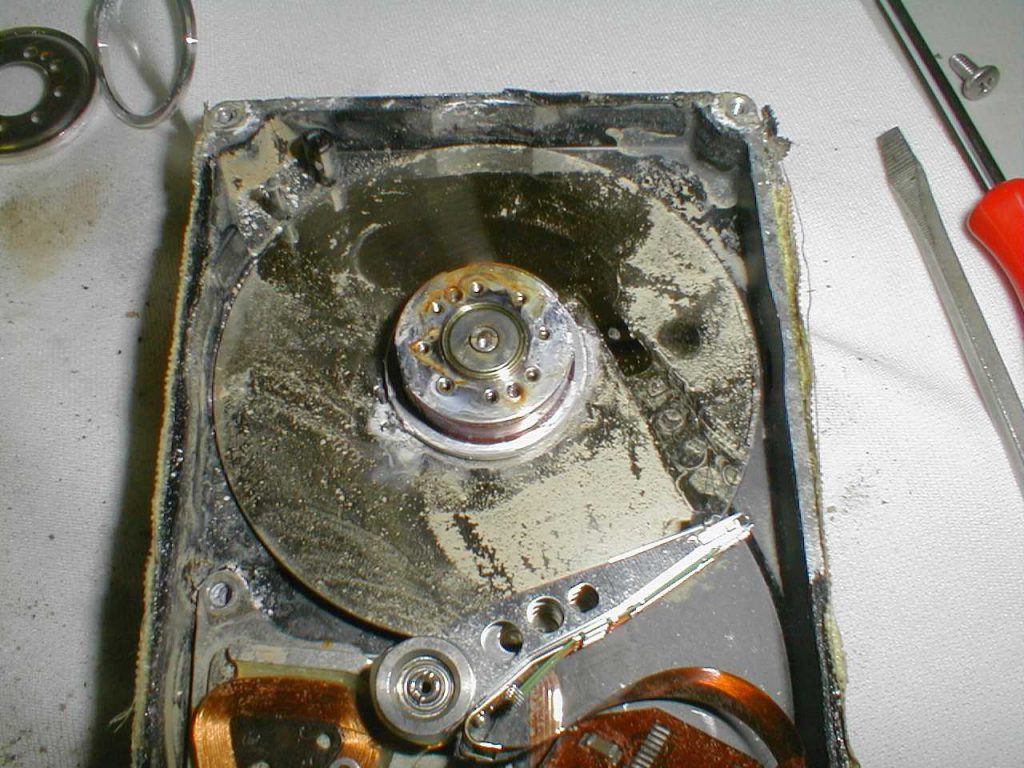 However, Ontrack engineers were not lacking resources and there was still a glimmer of hope. Indeed, after many hours of work, the engineers successfully recovered 99% of the data stored on the hard drive. Let's see how this was possible:

Although the damage was significant, as you can see from the image above, the rotating metal discs (referred to as ‘platters’) which stored the data remained mostly in a salvageable state. Luckily, most parts of the drive that contained the data (240MB of the 400MB total disk storage capacity) were still in a fair condition. In addition, the NASA computer where this drive was used was running the DOS operating system, which was designed not to disseminate data across the entire disk (as most modern file system formats tend to do). Instead, DOS grouped them on specific locations of the drive and as luck would have it, the precise spot that avoided the damage from shock and dust happened to contain useable information.

The drive platters were carefully removed from their original drive, cleaned and placed in a new, spare hard drive, but that wasn’t all. As the original electronics were completely unusable our engineers had to test different types of compatible firmware to gain access to the data. Jon and the team managed to overcome all of the odds and recovered 99% of the data collected in space by the crew of Columbia.

The purpose of mission STS-107 was to collect information from biological experiments. These results, some of which were recovered from the salvaged 400MB hard drive, were published more than 5 years later in the April 2008 issue of Physical Review E.

Check out some of our other posts for interesting data survival stories. Got a question? Let us know by tweeting @OntrackUKIE

Alternatively get in touch with the team for more information on data recovery services.